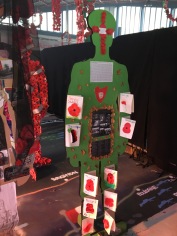 I visited the event with my friend Liz Waddell and we were blown away by the whole thing: the creativity each organisation showed in decorating their soldier; the effort Deana and her team put into transforming Coalville Market into trenches, a cinema, a thinking booth, and then turning the whole thing into a darkened tunnel, visible only with head torches; and the fantastically creative mind that came up with the idea for the whole shebang in the first place.  She really does think outside the box, does Deana, but the most inspiring thing is the way she manages to bring her ideas to reality, no matter how unlikely that might initially seem.

I felt very privileged to be involved with the Famous Fifty project, commissioned to run a couple of writing activities for local residents and, later, to dash in a single day between 3 schools and their youth base in the Market Place, prompting young people to imagine themselves in other people’s shoes and share their thoughts in poetry or prose.  Later, I created a ‘found’ poem from snatches of their work, and their writing and mine became part of the exhibition.

The Famous Fifty soldiers are currently on display at the Coalville Co-op in Bridge Road, but plans are afoot for them to move to Yorkshire Sculpture Park very soon.  In the meantime, The Heroes are working on their next project – Fifty Famous Females, a celebration of women past, present and future – to mark the centenary of the Representation of the People Act of 1918 which first allowed women to vote.

Here’s a link to the film about the exhibition (and if you look carefully behind the soldiers on display, you’ll see occasional glimpses of a film of me reading my poem.)