In June 2019 I was privileged to be part of the unveiling of an armature in Loughborough’s Queen’s Park commemorating Songster, a plucky little war horse requisitioned from the town in August 1914 for active service in World War One and returned here against all odds in 1919, to live out his days on a farm in Woodhouse Eaves.

I’d been commissioned by the Carillon Tower and War Memorial Museum to write the story of Songster in 2018 and along with Liz Waddell, the book’s illustrator, was invited to the special event on Armed Forces Day at which twelve-year old Lewis Main unveiled the model of the horse that had been ridden and cared for by his great-great-grandfather, local yeomanry soldier Bert Main.

At the event we met Susan Osborne of the War Horse Memorial, who told us about the National Purple Poppy Appeal and some of the charities who benefit from the money raised by it.  The purple poppy was initially created in 2006 by the charity Animal Aid to commemorate animals who served during conflicts and who are, the charity believe, the forgotten victims of war.  The inaugural National Purple Poppy Day wasn’t launched until July 2018, and has since been designated as August 23, this being the date of the Battle of Mons which saw the first cavalry charge of the Great War.

Following our chat with Susan and the enthusiasm she showed for her work, Liz, myself and the Carillon’s Mary Baird asked if we could cover the Songster armature with purple poppies on Armistice Sunday 2019 to raise awareness of the appeal.  Charnwood Borough Council were happy to say yes.

But now we need hundreds of poppies to cover him with!  We’ve put a call-out on Facebook asking people to get knitting, sewing and crocheting poppies and are keeping our finger’s crossed that lots of people take up the challenge! 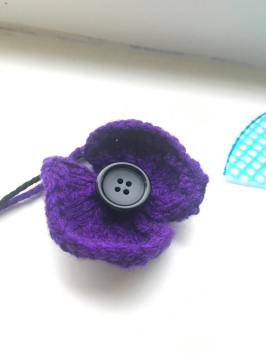 I’ve had a go at knitting a purple poppy myself – not bad for a first attempt, even if I do say so myself!